THE DECLARATION OF OUR LADY OF MOUNT CARMEL AND ST.JOSEPH CHURCH AS MINOR BASILICA

Basilica of Our Lady of Mount Carmel and St. Joseph Church was built in the year 1673. The basilica is dedicated to Our Lady of Mount Carmel and St Joseph. The solemnity of the Assumption of Our Lady is celebrated as an annual sixteen-day confraternity festival, from 31 July to 15 August. The basilica is also famous as a pilgrimage centre in the southern part of India. It serves as the Mother Church for 14 churches. In a letter dated December 11, 2020, the office of the Congregation for Divine Worship and the Discipline of the Sacraments approved the application of the Archdiocese of Verapoly to elevate the status of the former Cathedral of Varapuzha to a Minor Basilica. As a minor basilica, it will be one of only 28 nationwide and 10th in Kerala, and the first one in the country to be named after St Joseph.

Here is a brief history of the Basilica of Verapoly.

1673– Fr. Mathew of St. Joseph, better known as Matheus Paadiri obtained permission from Dutch Governor to build this church in honour of  Our Lady of Mount Carmel.

1682– Opening of the Verapoly Seminary for the formation of native clergy.

1700– Vicario Apostolic Angelo Francis chose this monastery and church as his residence and centre of governance.

Joseph to the title of this church.

1904– Archbishop Bernard Arguinzonis changed his residence to Ernakulam but maintained the name of the Diocese as Verapoly because of its importance in church history.

1920– The old church collapsed; in the next year foundation stone was laid for the present Basilica. Rev. Brother Leo was the architect of this church. It was consecrated after three years by Archbishop Angel Mary OCD.

1981-The Latin rite members from the Syrian Malabar Province came to Verapoly, formed the Verapoly Unit, which was later named the South Kerala Province.

1992– As a result of territorial regularization, the Church was entrusted to the Manjummel Province.

2021– The church was elevated to the status of a Minor Basilica of Our Lady of Mount Carmel and St. Joseph by Pope Francis.

Even though this Basilica was entrusted to the Manjummel Province only 29 years ago, it has roughly four hundred years of history to speak of. At present the Manjummel province is the custodian of the two historical churches, i.e. one at Verapoly and the other at Manjummel. If the first monastery at Koonammavu where the province was planted in1857 as a tertiary indigenous congregation had not been handed over to the Diocese, there would have been three.

The advent of the Carmelites to Kerala hails back to around 1640 with the coming of Fr. Diego and Fr. Joseph Alexis at Kuravilangad, near Kottayam. They were not able to start a monastery because of an objection from the Jesuits. After many years Rome sent two groups of Carmelites to India.  One was the group with Joseph Sebastiani who came by land route, and the other group was headed by Fr. Hyacinth who reached here by ship. Joseph Sebastiani came as a papal delegate to study the problems in the Malabar church. Fr. Hyacinth arrived after Sebastiani and continued the work.

The Synod of Diamper (1599) convened by Alexis de Menesis and the Coonan Cross Rebellion at Mattancherry in Cochin (1653) were the remote and immediate reasons respectively, for the coming of Carmelites to Kerala. Rome requested the intervention of the Carmelites of the Roman Province to handle the situation in the

Malabar region. The misunderstanding between Rome and the Portuguese Padroado* was also in the background. When the Malabar church was under the Padroado, Jesuits were its loyal instruments. Once the Portuguese lost Malabar and Cochin after the Dutch invasion, Propaganda Fide might have used the situation to take control over the regions which were under Portuguese Padroado by sending Italian Carmelites under the leadership of Joseph Sebastiani and Hyazinth. Therefore, I look at the Synod of Diamper as a remote cause for the building of the Basilica of Verapoly in 1673 by Matheus Paadiri, who was a member of the commissaries sent by Propaganda Fide.

The construction of the first Verapoly Church took place during the Dutch Period which was hostile to catholic missionaries. This was the hurdle that Matheus Paadiri had to overcome. When other foreign missionaries were asked to return to their homelands by the government, he remained in Dutch India. Moreover he made an acquaintance with the Dutch governor by helping him to publish a botanical encyclopaedia about the plants of Malabar.

If the first church was built during Dutch period, the present Basilica was constructed from 1921 to 1923, during the British colonial period. It is interesting to note that the Carmelite missionaries had to face five different political circumstances in their story of evolution and growth i.e. the Portuguese (Padroado), the Dutch (Protestants), the British (Anglicans), the Muslim invasion by Tipu Sulthan and the Native Hindu Rulers. There can be done a good research on this topic such as ‘the survival of Carmelites during power transitions and wars in Malabar regime’.

There is a common saying that ‘history repeats itself’. This is true with regard to the Basilica of Verapoly. The new declaration is resonant of this statement. The church has regained its grandeur through the hands of the Carmelites. Now the province has increased responsibility. This event calls forth the need to evaluate the historical consciousness. This can be executed through the initiatives to preserve and respect antiquity, old buildings, structures, museums, archives, chronicles and handing over the history of the province unto the younger members etc. Historical awareness is the platform from where we can inherit self-knowledge. To know the past is the way to self-realization. Lessons from the past equip a person to live in the present meaningfully and to face the future with courage. To disregard history is to lose the energy of every society.

(*it was a practical conformity between Rome and Portugal through which the Holy See delegated the management of new local churches which were formed as the result of maritime expedition. But after the formation of Propaganda Fide for Evangelization, there arose conflicts about jurisdiction of diocesesbetween Padroado and Rome.) 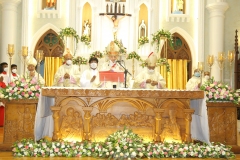 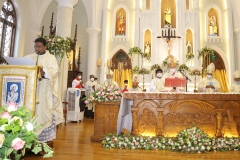 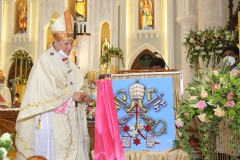 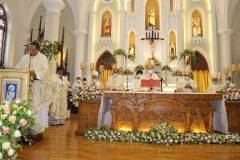